A quick review of the TYT TH-7800 as I don't see it mentioned very often, if at all, in the facebook group "what's the best cheap.." posts.

I am one of those weird people among us that think it's ok to have more than one radio :)  I know this is very rare in our community, but it is what it is.

My original plan for this was for mobile, but I'm enjoying it so much I might rethink that.  For some reason when I get in my vehicle I gravitate towards GMRS and I might just stick with the Kenwood I have in there.

Firstly, I paid $153 for this on Amazon to a US seller, and it arrived in 3 days.  That listing no longer has stock and this radio seems to be $215 which is about the same as the similar spec Anytone AT-5888V and not too much less than the big brother TYT TH-9800. but then you are approaching Icom IC-2730A on sale price territory.  For me though, $153 for the 7800 was a no-brainer.

Let's put it in perspective.  This is a Chinese radio, and in that camp I feel the  TYT is a step up from the ubiquitous Baofengs and similar.  On the HT side I think the Anytone is better, but I'm not convinced that that's true of this radio vs the Anythone AT-5888V which looks very similar to the TYT but also kinda naff.  A modern Icom, Yaesu, or other Japanese brand would be hands down BETTER. I don't think there's a debate about that.  Here's something interesting though.

Check out the discontinued Yaesu FT-8900, and how much that goes for used.

Clearly TYT have some explaining to do here. It's an obvious copy but I doubt for a second that the TYT has exactly the same internals. Even if they cloned the core radio circuitry I bet they cut corners on the internal amp and other anciliaries.   Of the handful reviews out there, one owner claims to have both and prefer the TYT, but I'd take that with a grain of salt.

As far as I can tell, the only significant difference with the 9800 is dual vs quad band, but correct me if I'm wrong, 6m and 10m without AM/SSB is a real fish up a tree feature offering.

On to the radio itself.  Firstly, let's get the three things out of the way where it falls short.

1) Speaker audio.  I have a Kenwood and an Icom sitting here, and they are both night and day better than the TYT in terms of  speaker audio quality. Even with an external speaker, the TYT lacks that kind of clarity that a more expensive radio will produce.  Having said that, a few days in, it's not something I notice anymore. I'm sure using the Kenwood and Icom again side by side would make it obvious again, but I can definitely live with it.. it is acceptable.

2) The TYT programming software is pretty clunky.  You can't copy and paste channels, or move them around in the list which means long term good organization of big channel lists will be a challenge. There's also not the concept of different channel groups, but that's not unusual on a dual-band.  CHIRP "works" with this radio, but I've had issues.  Settings showing up is a bit hit-and-miss.  At first I couldn't get it to write at all, but I think the trick is to use the TYT software to program a few variations of repeater setups, push to the radio, then pull it into CHIRP from the radio and use it as a copy/paste starting point.  So far so good with this strategy.

3) As far as I can tell (please correct me if I'm wrong) split tone repeaters are not ideally supported.  I say "not ideally" because you can absolutely use them, but like my Icom (and unlike my Kenwood and Anytone HT) there is no separate setting for encode vs decode.  It's confusing because for any channel there is both a Tone setting and a DTCS setting, but it's just to mess with your head. The process is:

Confusingly, if you are using DTCS, the software might throw in a default value for the CTCSS field (and visa versa) that you can't zero out.  It's odd.. but it's ignored.

That means that if you have a repeater with different tones set for encode and decode, you only add the tone for encode, and have to live with the fact that you will hear any and all traffic on the receive frequency, even if it's simplex / no repeater activity.  It is what it is, and I can live with it.

Something to note is that it's definitely less forgiving of randomly routed coax.  The line coming in from my antenna and joining running behind my desk didn't give the Kenwood or Icom any issues, but created scratchy transmits on the TYT.  Rerouted cleaning and good to go.

There is a whole lot of good going on here.  Let's be honest, the Icom IC-2730A is the elephant in the room when it comes to entry level detachable faceplate dual bands, and I would prefer that radio (and may even buy one as I see they are $270 on sale right now) but then there's the whole MARS mod physical solder thing for someone like me who is also a GMRS guy and wants these frequencies open in case of an emergency in the middle of nowhere - and I often go to the middle of nowhere.  By entering a password (supplied) you can open up the TYT frequencies through the supplied software in a couple of minutes.

After that, while the software programming does feel a bit clunky, the front panel and handset key programming and manipulation is really really good.  It didn't take me any time at all to be completely at home, switching from VFO to memory, pulling up frequencies or channels,  scanning and switching back between the two VFOs and whatever I needed to do.  All VERY straight forward and intuitive.

In simplest terms, the TYT-7800  (like many dual-band radios) is effectively two in one, with a left and right display along with corresponding left and right controls for selection, volume, squelch, power level etc.  That's why it's attached to my desk right now and my Kenwood UHF and Icom VHF radios are switched off. There's just something really nice about this setup 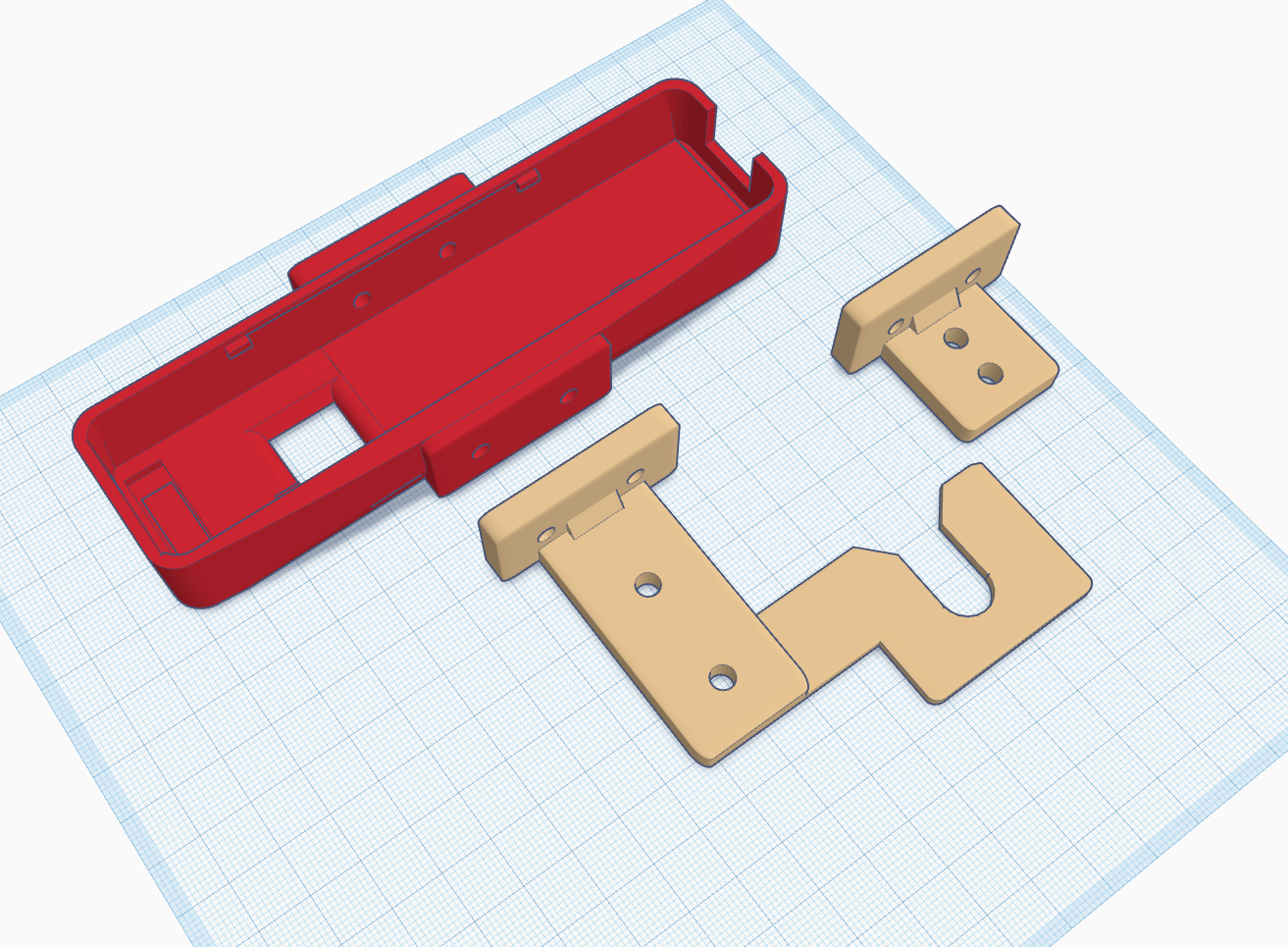 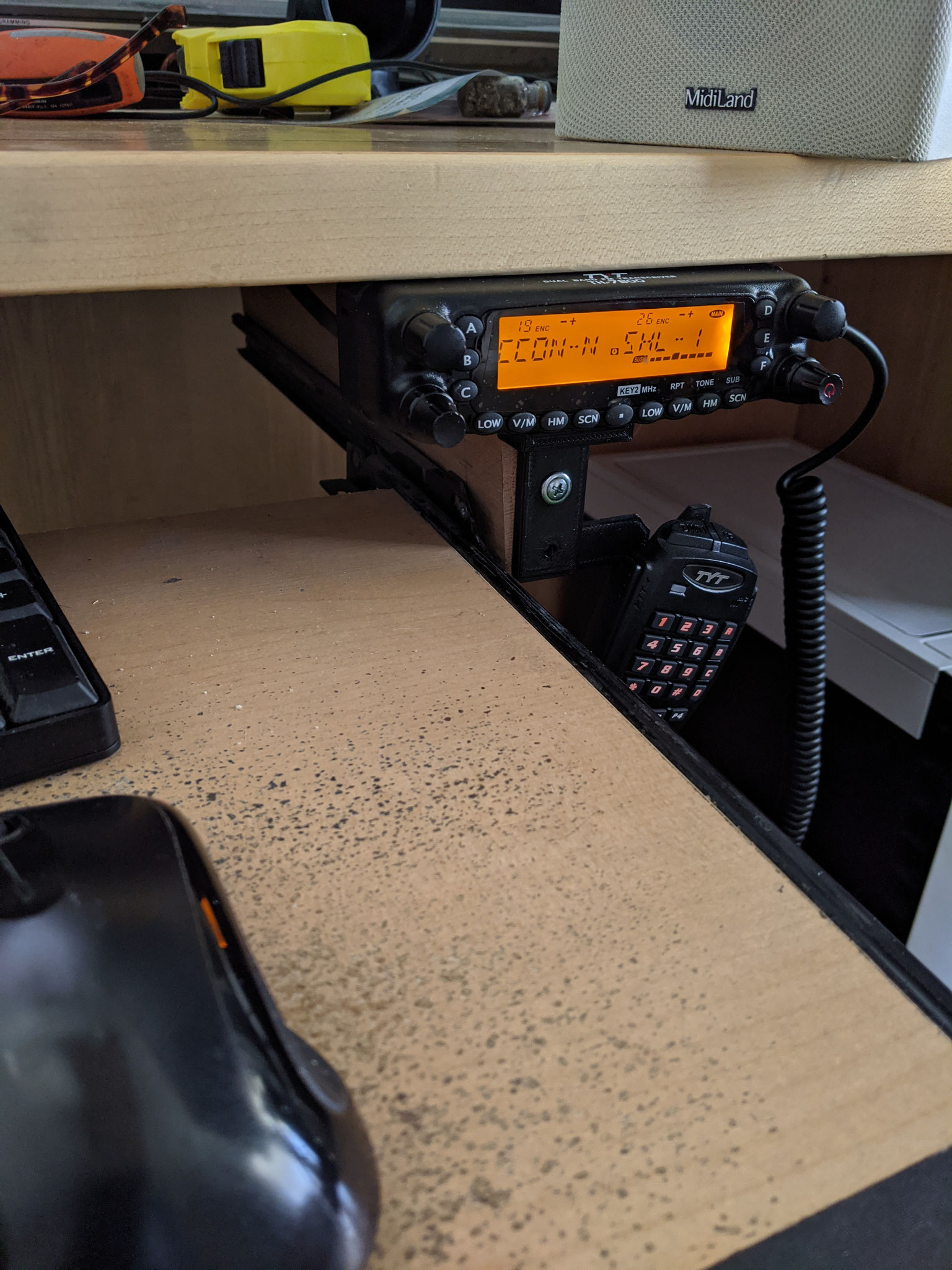 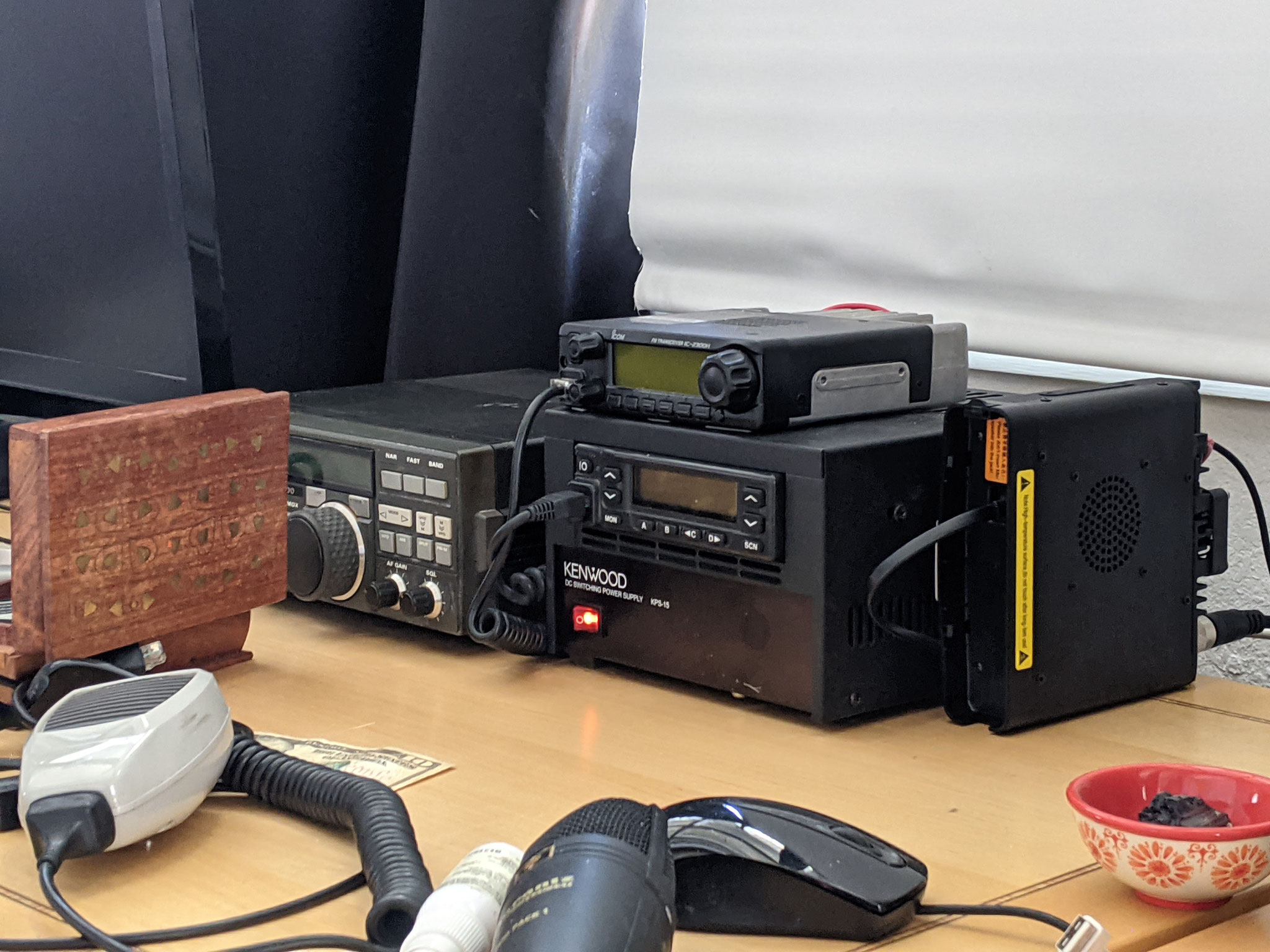 The detachable face is a very appealing feature allowing very light "local" implementation with the base itself quite a bit further from my screens and other potential noise sources. A quick 3d print, and I'm all set with a desk mount with mic hanger.  In my vehicle this will be even more important and offer significantly easier stealth install. I've known I wanted a detachable face plate unit, I just didn't know how much I would enjoy it. It might be one of those "can never go back" features.

On transmission and receiver quality, I have no complaints. On weak signals I've done side by side comparison against my Icom and this TYT is hearing the same things.  A reason I wanted a new radio is that I often get feedback that my signal strength is weak, but it's really that I don't have much of a hard edge to the tone of my voice, so I guess as a human being I'm a little narrowband!  My Kenwood doesn't have mic gain and this situation was starting to bug me. The TYT has mic gain settings and a reputation, if anything, of having too hot a mic, and we'll see how well that goes if I test it in my noisy old Vanagon, but for my base that's not an issue.  Signal reports so far have been very good, and that's on the same coax and the same antenna as I was, more often than not being told I'm crystal clear but very faint.

My setup at this point is I tune one side into my typical "chat room" frequency, and put the other side on scan.  The scan is faster than my Anythone HT, and slower than my Kenwood mobile, but I have no complaints.  Definitely it's much nicer to have this setup where I can grab the mic and jump into the "chat room" when traffic comes up on it without having to stop the scan on the other side.  It feels efficient.

I haven't tried the cross band repeater functionality but it's definitely intriguing. The main repeater I use on 2m bans cross band repeater use, but I can see it being useful around the campsite potentially acting as a relay to my HT. It's not out of the question that if there's a net going on my HT can't pick up, I would use the crossband frequency to get it to the HT if I'm around the house, but we will see. Nice to have feature for sure.

In summary.  It's the first dual-band mobile radio I've bought, and I'm really happy with it.  It's not an Icom IC-2730A but it's a similar form factor and when the TYT is on sale, it's less than half the price of the normal Icom price, so there is that.

I do believe this is the last radio I will ever buy!!! (lol)

A friend and I decided to go on a bit of a radio drive around today, so yesterday I threw a print together to mount the YTY in my Vanagon.   I did a quick and dirty  3D Print to mount the face plate and threw it in the van, with the base in my usual slot, mounted upright in an organizer in down between the seats.

I have to say I was impressed.  Major take aways:

A reason I shied away from the TYT TH-9800 was reports of a hot mic in loud background noise environments.  I wasn't sure if that issue transferred to this TH-7800, and couldn't find info either way.  I can tell you for sure,  if signal reports from a vanagon with the windows down at 65mph sound loud and clear there is NOT a hot mic issue.  SUPER happy about this.

If it was closer to me it would be find, but full volume was just about enough for me to hear over the din of the Vanagon.  I know for a fact that an external speaker (even unpowered) can boost that, so not a deal killer.

At this moment in time, if this was still out there for $160 I'd drop the money right now for another one.  Looking at the connecting cables they are simple 6 wire phone cables and I have everything I need to build them right now to create nice cabling.  I would probably likely cable to the head in this position, and cable an extension back for the mic so it's mounted near my right hand. That would allow me to fashion some kind of false heater vent looking thing on the dash to hide the head for security.