I blame The Dukes of Hazzard.

I've always had a thing for two way radios, and when I moved to the states in 1998, the first thing I did to the first vehicle I bought was to add a CB radio.  It didn't take long to discover with disappointment that no matter where I went, all I seemed to hear was an Elvis impersonator with tourette syndrome screaming at their echo mic.

Heading into the idea of a grim 2020 winter I was scratching around for ideas for a new hobby, and decided to study for the ham radio technicians license. Around the same time,  I looked at the various walkie talkies I'd picked up along the way and decided to go legit and buy the GMRS license.  That's when things got interesting.

What I didn't know is that beyond Walmart bubble-pack hand helds, there's a ham-ish GMRS community, and significant repeater infrastructure.   A repeater is a strategically placed device that "repeats" what it hears. It's a little bit more complex than that, but it's something that basically becomes the communications hub.  GMRS is up in UHF range which means it doesn't bounce around off the ionosphere like lower frequency ham bands.  It is "line of sight".  Going from one GMRS unit to another a couple of miles away n a city can be tough because of all the stuff in the way.  Going MANY miles to a repeater that is up in the air is easy though, so a well placed repeater can service an entire city - and in fact, a single repeater services the whole of Denver and surrounding areas.  It's not even very powerful.. it's just high up.

The realization that I could have meaningful communication with others from the Vanagon, and additionally have possible emergency service from the Vanagon or the motorcycles also appealed.

For ham you pass a test to show you have some level of understanding of the art, and at that point the FCC doesn't care if you transmit on a modified toaster.  Conversely for GMRS there is no test. Just a fee of $75 for 10 years that covers and entire family.  To keep things from falling into chaos,  the FCC mandates that only GMRS (Type 95) certified equipment can be used on GMRS.

This is annoying.  It means that you can't legally use cheap ham radios on GMRS, and specific GMRS products are too locked down to be used on similar ham frequencies!

In reality I find the attitude towards bending GMRS rules to be quite common.  The attitude towards cheap handhelds like the ubiquitous Baofeng UV-5R is you shouldn't use them because they are crap, not because they aren't type certified.  At the end of the day, the GMRS community and repeater owners are much more interested in appropriate licensing and on air etiquette than hardware.

Still.  Regardless of what toys I may or may not collect along the way, I definitely wanted my primary equipment to be type certified and legit.  My selection was significantly influenced by owning before mentioned Baofeng UV-5R and a very similar Chinese radio typed for GMRS.  The GMRS radio was effectively the same thing with nasty hobbled firmware, locked down functionality and a non-removable antenna.  Kinda aweful. This made me look at the consumer GMRS mobile units, like the Midland offerings,  with some distrust.

With some research I discovered that people who are actually in to radios are more likely to be using cheap used business radios for GMRS than the $300 new consumer offerings.  Tried and tested radios by Kenwood, Motorola and Icom that are used commercially by the thousands across the world are readily available and can be reprogrammed with relative ease.

Each unit has it's own quirks and limitations and I went for the Kenwood TK-880.  I now have a TK-880 (25W) in the Vanagon,  and a TK-880H (40W) at home.  They cost around $100 each, and I spent $20 on a programming cable.   My decision was made in part because when I came across the local repeater groups info online, they stated several of the consumer products, like the Midlands can't be configured for the repeaters. 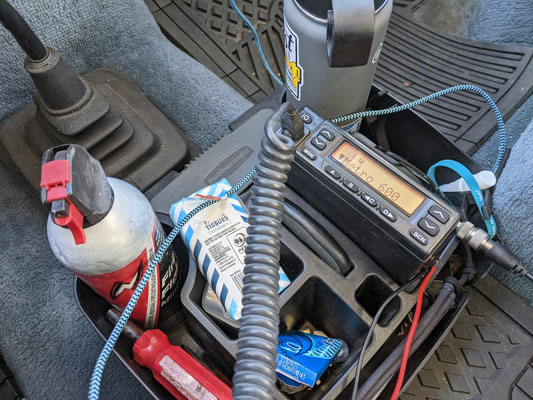 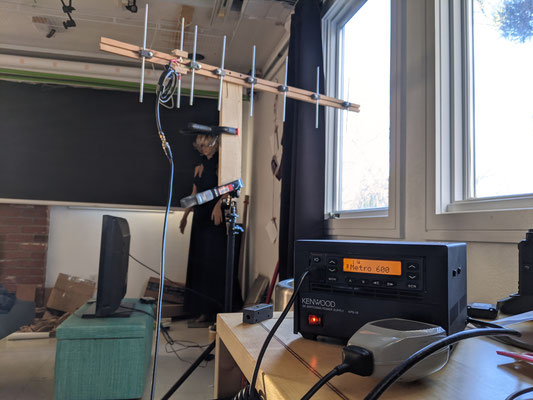 The Version 2 units I have require a resister to be removed from the circuit board to allow adding channels from the front keypad, but at this point I'm happy enough with the channels I've added via the available PC software.

At the end of the day, if your area is serviced by a repeater that's pretty much what you'll be tuned to all day.  You'll need some info to successfully connect, and often that is something you have to request to avoid non-licensed from abusing them.  MyGMRS.com is a good starting point to finding out what is near you.

As a bonus, these Kenwoods work down to 440Mhz, so when I get my ham license I can hit the local ham repeater too!  As far as I can tell, using a radio like this is the only FCC legit way to use the same unit for GMRS and ham.

I've learned a lot about antennas since starting this hobby and enjoy experimenting with making them.  In the photo above in my house you can see a directional "Yagi" style antenna I made for a few dollars that is my main antenna in the house for GMRS for now.  It's designed and built to be specifically tuned to the GMRS frequencies and  it works great.

Vehicle antennas are a little more complex.  Most vehicle antennas are built to be mounted in the center of the roof or trunk and that metal "ground plane" is an essential element to transmission efficiency.   For Vanagons with a pop-top, this is a no-go so we have to resort to a different antenna specifically designed for "no ground plane / NGP" often used on fiberglass RVs or roof rack, bracket mounts.

I antenna shopped with very little experience or knowledge, and it thankfully it turned out ok.  My criteria were:

What I ended with, purely based on spec and reviews is the Browning BR-136

To experiment I threw the antenna on an old mag mount and suddently it just worked.  Ridiculously low SWR throughout 2m and 70cm.  Awesome.  At the same time I grabbed a more typical dual band antenna, the Comet CA-2x4SRNMO (known to be a dual band very capable on GMRS too) so I could really experiment.

In general, the principles around antenna location are:

The vanagon in general can be a challenge, a vanagon with a roof rack is a different challenge.  Many moving parts and things to think through:

I did MUCH experimenting on  both GMRS and 2m calling frequency. I tested  SWR on a NanoVNA, SWR & power through an SWR meter, and even RF by clamping the mic open and walking round in circles with an old RadioShack CB SWR / RF meter in RF mode.  I spent literally hours trying to find the perfect solution, then finding the best compromise.

In the end, the original NGP Browning Antenna won.   It's easy to create a little ground plane for GMRS but not 2m.  It's easy for GMRS frequencies to ignore the roofrack, but less so 2m.  In the end, the NGP antennal basically just said to the van, "I don't care what's going on around me.. I'll just go about doing my job".   Mounting above the luggage rack gave very consistent results, on a mag mount, slapped on an 8x16" piece of steel I had kicking around.

To make life easy, I decided to mount that steel plate, even leaving an upright spur on it. If I need to lower the antenna for parking it will mag mount to this spur and not roll around.

I don't know why I didn't take photos!   I basically pulled the luggage rack, very quick and easy, and ran 4 bolts up through it on one side.  I bolted these to the rack itself, then drlled holes in the steel plate and bolted that on top.  I enlarged the corner drain hole and ran the cable through that, then just pass that under the luggage rack at the back. By releasing the small screws that hold the poptop tent on, I could pass the cable under that, and add it again. Hopefully the small gaps won't create a leak. We will see.

It looks pretty much like this and works really well.  A later mod is that I pulled out 5 feet of coax that is tucked under that plate when not in use. That allows me to move the antenna up to the roof rack spoiler when the poptop is popped - another few feet of vertical height never hurts.

Why is a great question.

It's fun, it's a safety backup and it's keeping my mind off the fact that there's a global pandemic.