VanAgony: The anguish of Vanagon Ownership.
Mods and Upgrades  ·  16. October 2020

Air tank under the Vanagon

Running air pressure from the spare tires appealed to my sense of "different" but once I got my mind thinking about a tank it was inevitably going to happen.  Honestly it's overkill but it's this kind of project that keeps my brain alive, and keeps me sane through COVID-19.  Do I need an online tank?  No.. but it's fun.  I can't say I have "onboard air" because this is just a tank, but I do have a little 12v compressor so I can fill it up on the road.  Just (for now) not constantly plumbed in as (for now) the only consumer is the solar shower.

I'd been on the lookout for a 4" diameter CO2 tank or a large used fire extinguisher for dirt cheap used, but in the end the prices of the air horn tanks was just too appealing.  I could have gone for a 3 gallon version, but the cost saving is minimal and the diameter, which is the same.. so no reason not to go a little longer.

In terms of fitment, length isn't an issue. There is gobs of space in a channel under the sliding door.  This is the unit I bought.

It's pretty much the same dimensions as the propane tank.  Here are some things I feel it's got going for it:

When I ordered it I wasn't quite sure how I was going to connect everything together, and how I was going to mount it.  In the end, the easy thing to do was use the included mounting rings going up through the floor.  The rear set are under the bench seat, easy, but the front ones are right in the middle of the floor.  To make this happen I had to get the heat gun out and peel the vinyl away flooring from the wooden sheet underneath, then counter sink the bolt heads into the wood and lay everything down again.  It really wasn't hard as the vinyl glue was long past it's best.

For ports I went all out on the main front 4.

The Schrader valve makes sense in that I can fill this at any gas station, but at home I've been connecting it to my compressor line that's at about 110psi using a male to male connector and just letting it balance out to my shop pressure.  Takes 30 seconds and is perfect.

I don't have a regulator on the OUT because right now it's going straight into the regulator on the solar shower via push fitting 1/4" NPT lines.  I'm snaking across the under side of the van, then up through the engine compartment between the inner and outer skin then out through the rear "air vent".  It works well. 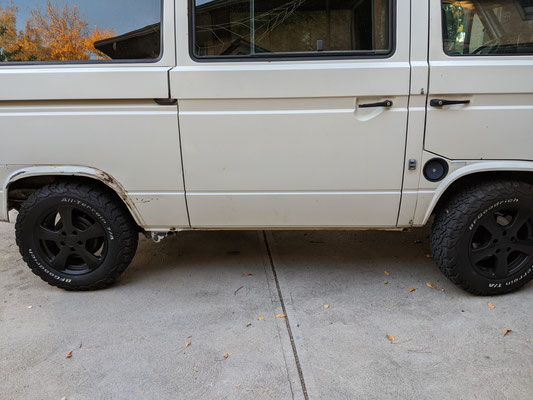 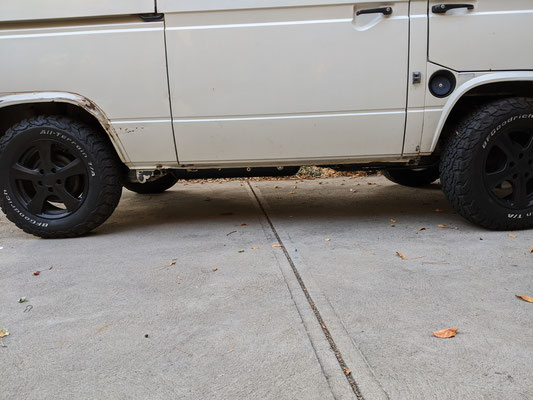 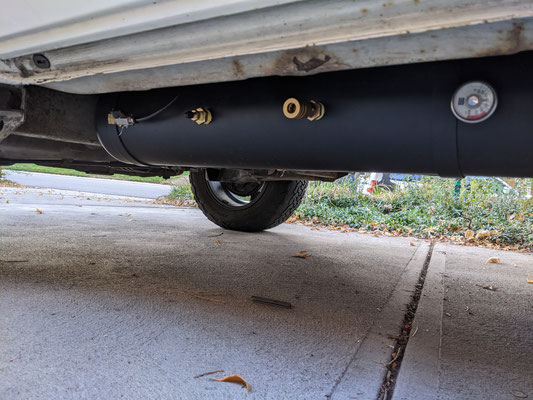