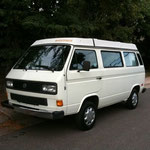 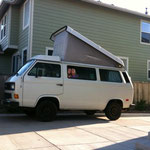 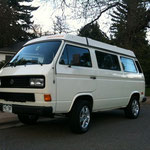 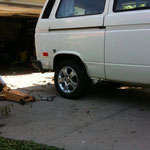 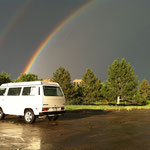 Divorce left me with two cool, but impractical cars.  A Porsche 911 convertible, and a 1980 Full Size Jeep I had restored. Neither of these worked when I started dating someone with two kids, so something had to change.

Abhorring all things "normal" the Vanagon caught my eye and I searched for about 2 months.  At the time,  tin tops where selling for $1,500 up, and campers for under $5,000 here in Denver and I looked at some beaters.  When a guy showed up in town having moved from California, CA rust free van along with him,  I balked a bit at the $7,000 price point but bit the bullet.

It's a 1987 Weekender, and it was in great shape inside and out.  Mechanically it was solid except for a leaking gas tank if you filled it all the way and nasty whine coming from the Transmission.  For the first week I just got used to how slow it was,  then one day the accelerator pedal dropped to the floor.  Turned out the cable connection at the throttle body was loose.. and when I reattached it I discovered I'd only been using half the available travel!  The thing all of a sudden felt like a rocket!

First things first.. WHEELS!   I scored a set of Audi A6 16" wheels on Craigslist,  had the centers bored out for the front and dealt managed to work my way through extending studs etc.  I sprayed the chrome bumpers black and that's pretty much how things stayed from 2008 until 2019 when I picked things up again.