Going into Winter 2017,  Slow White was not happy.  A weird coolant issue I couldn't diagnose showed up in the fall and I didn't have the time or energy to deal with it.  I bought a beater Mitsubishi Monterro to see me through the winter.. and turns out it saw me through 3.

It wasn't until early 2019 that I pulled my head out of my... the sand, and realized how much I had missed the Vanagon.  I'd just returned from a Mexico vacation, and as I often do,  had a yearning for a ratty vehicle project like a Beetle.  I remember driving up to the house one day and thinking, "Eurethra!" - there's my project right there!

The coolant problem turned out to be exhaust pressure getting into the coolant system. Bummer.

It took a good while to work that out, and I kept thinking I'd fixed things, but no,  issues reoccurred and I finally confirmed the situation using a block tester kit, seen here, atop a Libby Bong type setup - the only way I can think of to do this test without sucking up coolant.

I had a decision to make.  Pull this bad boy and fix the heads, or do an engine conversion?  The decision was pretty much made for me on budgetary reasons.  At the time (more on this later) I was planning on doing a Bostig Conversion, and having watched their videos, and a bunch more,  I decided I was up to the task of pulling the engine and transmission.

I kinda lucked out in a couple of ways.

1) My transmission had been whining ever since I bought it so when I happened upon a beat up Vanagon in a pick-and-pull in 2009 with a shiny trans on it,  I pulled it on the spot, and took the massive risk of spending $82 dollars on it ;)  It has sat in the garage ever since patiently waiting!

2) A guy in Colorado Springs who does Subaru conversions was clearing out his junk pile - including a full 2.1 with the newer AMC heads on it, for $125.  Done!

I pulled the heads off the parts engine to get a feel of what I was doing, and found them to be in pretty good shape.  Bought some parts, and started wrenching.

It took me two weekends because of the need for unexpected parts, but I'd say the whole thing (including tranny and parts engine) cost under $400 so well worth it.

Some things I learned during the process: 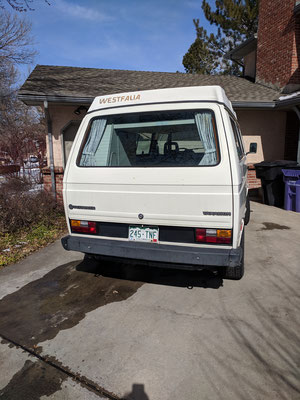 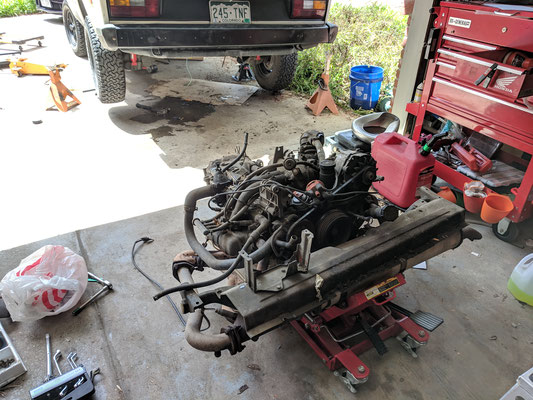 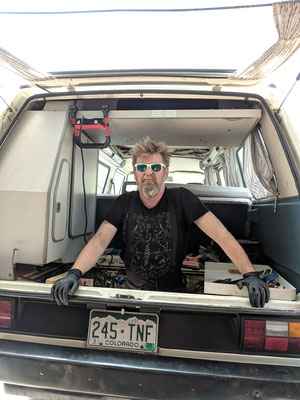 Of course that wasn't the end of it.  The Summer of 2019 turned into coolant-system-whack-a-mole.  Stuff just kept going out.

Ugh.  That on top of a myriad of other things on that I don't mind - because they are core to the van, not to this engine, but definitely getting old.. which is why my engine conversion plans are in full swing for the Winter 2019 / Spring of 2020.

Here are three tools I'm very glad I had for this job.

I have a bunch of tools but these three stood out particularly useful for this task.  The bottle jack with built in jack stand.. Genius!  Like I mentioned, I'm glad I didn't put the van on ramps because it would have been too far to drop the engine.  Having one of these each side and being able to go up and down safely as I wanted was great.

The middle tool is for hose clamps, and if you don't have it and your van has the original spring clamps you will say bad words.

On the right, I happened to pick up a set of box wrenches recently and I'm amazed how often I used them.  Really enjoyed them to be honest, and that was a surprise to me.